Actually looks better in conventional trim than it does as the range-topping Quadrifoglio. Dynamic from some angles, awkward from others.

We weren’t so sure about the Alfa Romeo Stelvio when first observing it spinning on a turntable at the 2016 Los Angeles auto show. That car was in full Quadrifoglio specification and wore large alloy wheels, a lower ride height and a chunky, body-colour bodykit. It looked large, bulky and a bit heavy-handed in its details - very far indeed from being an Alfa Romeo design classic.

But approaching the Stelvio for the first time in full production, non-Quadrifoglio form, we’re a lot more convinced. There are still some uncomfortable angles - the rear overhang always looks a little too long and overall it has the appearance and proportions of a jacked-up hatchback rather than a dedicated SUV, but in the right colours (metallic red and metallic blue are a good start) it’s quite a handsome vehicle. 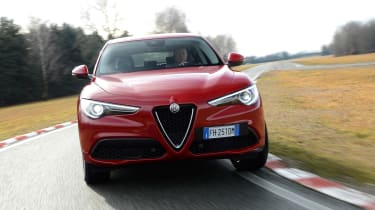 The contrasting wheel arch and bumper elements are a good start, reducing some of the visual bulk of body-coloured equivalents, while the Stelvio’s shape works well on slightly smaller-diameter wheels and chunkier tyres, as any good SUV should.

It goes without saying that with an enormous “Scudetto” grille and slim head- and tail-lights, it’s instantly recognisable as an Alfa too. Whether it’s a good thing that a brand like Alfa Romeo has had to resort to selling SUVs in order to compete is a different matter entirely...