Alfa’s cabins continue to improve; the Stelvio’s is much like the Giulia’s. Pleasing details, but slightly iffy quality in places

The Stelvio’s cabin is much the same as that of the Giulia, and that’s no bad thing. Avoid peering too closely and it’s an attractive space, with flowing curves to the dashboard, typical Alfa touches like cowled instruments, an attractive three-spoke steering wheel, and modern-looking features like the BMW-style gear selector and the similarly BMW-influenced iDrive-style rotary control for the touchscreen infotainment system.

There are some genuinely attractive, desirable touches too. Alfa’s use of wooden trim elements is among the better we’ve seen in modern cars, and the classic combination of black leather and walnut trim works as well here as it does in a Giulia from the 1960s. Better still are the optional aluminium gearshift paddles, which look as if they’ve been lifted straight from Ferrari’s product range and knock spots off the pokey flippers used by every other manufacturer in this segment. 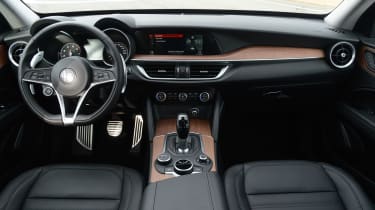 Start pulling and pushing at things though and some of the sheen wears off. Build quality is a huge improvement on Alfa’s previous efforts but the cabin never feels quite as permanent as it does in a Porsche or Mercedes-Benz. The BMW-style gear selector is the worst offender, exhibiting rather less than BMW-style quality, with a flimsy look and feel.

Still, the ergonomics are good - it’s been a long, long time since Alfa based its driving position around simian rather than homo-sapien dimensions, while the Stelvio feels a great deal more spacious than many of its rivals, there’s plenty of adjustment where it’s required, and cabin refinement is perfectly reasonable despite the best efforts of some vocal engines. Technology is up to par, too - there are 6.5 and 8-inch central infotainment screen options, navigation, DAB and a ten-speaker audio system. All are relatively simple to operate via that rotary controller.