Thanks to its dainty kerb weight, MPG figures are impressively high, even against German rivals.

Yet another advantage of the Stelvio’s lithe kerb weight is a positive effect on MPG and running costs. Most German rivals in this class all have spookily similar MPG ratings when applied to the core four-cylinder diesel models – each averaging 56mpg. Volvo claims a slightly less impressive 54.3mpg for its lower powered diesel XC60 D4.

In comparison the Stelvio will just top 60mpg on the lower powered diesel, with the all-wheel drive 207bhp diesel also reaching an impressive 58.9mpg. As a result these diesel models should prove to be mightily attractive to those who have to worry about company car tax, but if you are a private buyer, you might just be tempted by the petrol options. 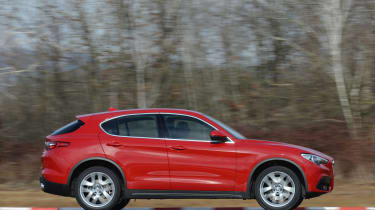 With 276bhp on board, the higher-powered petrol Stelvio beats the Q5 2.0TFSI quattro and Volvo XC60 T5 for power, but still matches or betters them for MPG with 40.4 MPG on the combined cycle in comparison to the Volvo’s 38.7 and Audi’s 40.4mpg. It must be mentioned though that the Stelvio will likely struggle to hold on to its value as effectively as rivals, meaning overall running costs might actually prove to be higher on the Italian car.