Quick in all forms and when the Quadrifoglio arrives, obscenely rapid. Refinement lags behind some rivals, however.

Quickest out of the blocks, at least until the Quadrifoglio arrives, is the 2-litre petrol. Sink right pedal to carpet and the Stelvio will cross the 62mph mark in 5.7 seconds, passing 100mph in around 15 seconds and eventually running out of steam at 143mph. For reference, a Porsche Macan equipped with the 2-litre EA888 four-cylinder turbocharged petrol engine takes a second longer to hit 62mph and fails to match the Alfa by just 1mph at the top end.

The diesel is also brisk, grumbling from rest to 62mph in 6.6sec and topping out at 134mph, making it plenty quick enough for most owners. Closest comparison here would be something like an Audi Q5 2.0 TFSI S Line, which undercuts the Alfa by three tenths over 0-62mph but achieves a higher 147mph top speed. Either way, Alfa’s latest product is competitive on paper whichever engine you choose. 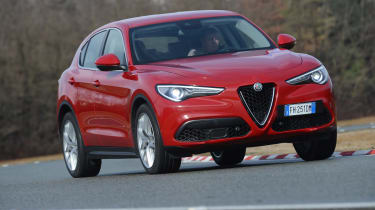 The way the Stelvio delivers that power is perfectly suitable too, feeling appreciably brisk both in everyday driving situations and when you’re calling for more performance. The petrol is the more enthusiastic of the pair, both in terms of responses and in the way it sounds when working hard, and it’s smoother too - though neither motor can quite match the class leaders for refinement.

Opt for Alfa’s aluminium shift paddles and you do at least have a tantalisingly tactile way of getting up to speed, though coming down from high velocities is less pleasurable. Alfa employs a system called IBS (Integrated Brake System) for its braking. The electro-mechanical system is effective in terms of stopping distances, but pedal feel is indistinct and we did experience fade when testing the car on an alpine descent.

Due later is the Stelvio Quadrifoglio, which is claimed to reach 62mph in 3.9 seconds and top out at a slightly loopy 177mph. The most potent Porsche Macan, the Turbo Performance Pack, is half a second slower to 62mph and stops accelerating at 169mph. The Quadrifoglio should prove rather amusing to drive.