Light-weight and ultra-direct steering contribute to an agile chassis. At its best in Dynamic mode, which reduces steering assistance.

We were impressed by the handling of the Giulia, and sitting on the platform there’s little reason to suspect the Stelvio will disappoint. And it doesn’t: Alfa has worked hard to make the SUV drive much like the saloon, and the result is an agile, confident and yes, even fun SUV to drive.

The underpinnings are fairly sophisticated, using double-wishbones up front and a multilink setup at the rear. This is (unsurprisingly) much the same as the Giulia, but the Stelvio rides 140mm higher and therefore battles a higher centre of gravity. On our first acquaintance with the car, Alfa Romeo told us that the Stelvio’s dampers are ‘quite a bit more expensive’ than those of the Giulia, a result of tuning a heavier, taller car in a way that makes it feel like a lighter, lower one. Even so, the Stelvio is as much as 200kg lighter than its closest competitors; the 2-litre petrol tips the scales at 1660kg.

Despite Alfa’s efforts at controlling body movements, it’s the steering most will notice first. What it lacks in the kind of wriggling tactility we love from a steering system (not something delivered by any SUV, but the kind that a Porsche Macan gets closer to than most), it gains in a Ferrari-style rate of response and precision. It doesn’t take much acclimatisation time and never feels fidgety; instead, it’s just direct and allows you to place the relatively lightweight (1660kg) Stelvio with pleasing accuracy. 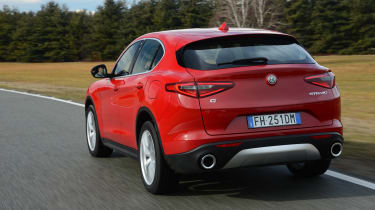 You’ll want to keep the Stelvio in Dynamic mode to really get the best from the steering, as it reduces the assistance (though the rack still remains light, aiding the feeling of agility) and makes the steering’s off-centre response feel a little more natural.

And true to Alfa’s word, the Stelvio does resist body roll effectively and grips well throughout a given corner. If anything, the slightly under-supportive seats are more of a limiting factor to quick cornering. It fires out the other side of a turn effectively too, thanks to all-wheel drive traction and a rear limited-slip differential. Porsche-style oversteer moments aren’t really on the cards (and you can’t disengage the ESP) but the Stelvio feels fleet of foot in a way many of its rivals can’t match. UK roads will be a true test of its ride quality, but early impressions are positive - Alfa’s expensive dampers seem adept at soaking up iffy surfaces.