Not the Stelvio’s strong point, but the basics are there, and it does still feel special 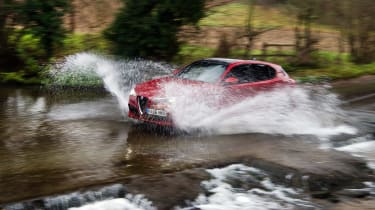 Although there is plenty to like about the Stelvio’s skunkwork’s development style, the result is the outright packages just aren’t as polished and premium as those of most rivals. This is most evident in the interior, which struggles to warrant the QV’s £70,000 price tag due to questionable build quality. Granted, basic kit is pretty substantial and the basics are right, such as the firm, yet supportive seats, well shaped and nicely trimmed steering wheel and wonderfully tactile aluminium paddles behind, but the overall interior is just not up to the high standards seen in rivals such as the Porsche Macan.

Something that also seems a tad compromised is the seating position, which like many SUVs with saloon car origins, seems to canter the driver forward ever so slightly, as the steering wheel doesn’t so much level out in front of you as rise from somewhere lower beneath your feet. If you’ve driven a Volkswagen Tiguan, you’ll know what we mean.

Space inside is otherwise good, sitting somewhere between an Audi Q3 and Q5 in terms of interior accommodation, although the boot is more than big enough to cope with an evo photographer’s gear as Aston Parrott found out after running one as a long-term test car.