The A110 is powered by a new 1.8-litre four-cylinder engine with a single turbocharger and direct injection. It’s the same unit that’s used in the latest Mégane RS. In the fullness of time this engine is set to produce 300bhp-plus, says Alpine (in the forthcoming Mégane RS Trophy the wick has been turned up to 296bhp), but the most we see in the A110 for now, is the 288bhp output of the S.

Given its relatively humble DNA, the Alpine’s in-line four is a more charismatic companion than the Porsche’s flat-four. It’s a zingy little unit, responding crisply and quickly to the throttle, its rasping exhaust note egging you on, encouraging you to get it bouncing off the rev limiter. Ramping up the driver modes (there’s Normal, Sport and Track) adds some extra fruitiness to the soundtrack, with the pops and crackles on the overrun being particularly entertaining and the overall sound a mix of rasping induction noise and growling exhaust. 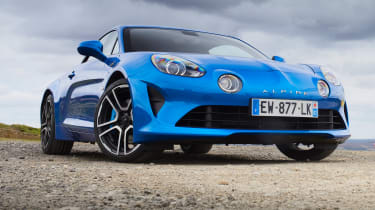 Less impressive is the seven-speed gearbox. There’s nothing intrinsically wrong with it – it shifts swiftly and smoothly enough – it’s simply that the twin-clutch unit isn’t as incisive as you’d want in a sports car. Quick getaways are achieved by slipping the clutches, while there’s a similar feeling on fast changes, giving the impression that performance is being fractionally sapped. Still, you get a nice blip on downchanges, while it’s relatively painless when left to its own devices. It's responsive enough in Sport mode too, encouraging you to drive in this mode more often than not.

Underpinning the Alpine is a light and strong aluminium structure, while the same material is used for the body panels, all of which helps the Alpine tip the scales at 1103kg. The car’s pure ethos is reflected in its suspension, which features unequal-length wishbones front and rear, coil springs and passive dampers – Alpine’s engineers wanted to avoid complexity and so adaptive items were dismissed.

Weight distribution is, according to Alpine, 44 per cent to the front and 56 per cent to the rear, while weight saving has even extended to the rear calipers including an integrated handbrake unit. An upgraded Brembo system is also available at a cost, unless you opt for the range-topping S that receives it as standard.