Alpine A110 review - interior and tech

Despite its relatively tiny dimensions, the A110 doesn’t feel small or cramped inside. Previous Alpine MD Michael van de Sande is a towering 6ft 7in tall and the car was designed to make sure even he fits in, so for anyone of remotely regular proportions there is plenty of room in which to operate. That said, the driving position is a little odd, with the steering wheel canted slightly like that of a bus, while the only way to adjust the seat height is with a set of spanners.

At least the cabin is neatly styled, even if it isn’t as eye-catching as the exterior. It takes a minimalist approach, with all the major controls grouped into the central infotainment screen, which is slick-looking but frustratingly laggy and counter-intuitive to use. Ahead of the driver is a TFT dial pack that changes visual theme dependent on whether you’ve selected Normal, Sport or Track modes – each of which can be accessed using a button on one of the steering wheel spokes. 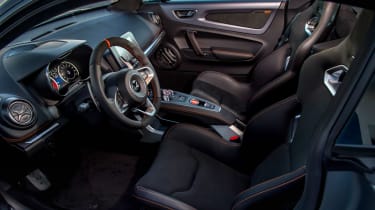 Other driver aids include the Alpine Telematics function, which allows you to record and store lap times and performance data, plus it also delivers a number of real-time displays for parameters such as turbocharger pressure, various fluid temperatures and power and torque delivery.

Quality is good, with some nice-looking and feeling materials used on the flagship S model, including leather and Dinamica fabric. Yet some of the plastics give off a low-rent vibe and certainly aren’t in keeping with a car that weighs in at as much as £55,000. And while the cabin is roomy, there's not a great deal of luggage space. The rear boot will just about hold a carry-on-sized bag, while the "frunk" might be more suitable for soft luggage as it's more of a tray than a compartment. There are at least some extra storage bins in the cabin, notably one on the bulkhead between the seats that's big enough for 500ml bottles and the like.