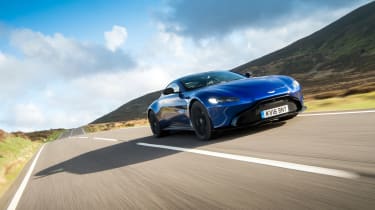 As you’d expect, the Vantage is a lively performer, with the 0-62mph dash delivered in a claimed 3.7 seconds (over a second faster than the old car), while top speed is a heady 195mph. That said, in reality the Aston can’t quite match the former figure, a lack of traction meaning we could only record a time of 4.5 seconds. However, once rolling the Aston gathers speed with real intent, the tidal wave of torque catapulting the car up the road. It may not be as rabidly quick as Porsche 911 Turbo, but it’s not far behind. The tweaks to the ECU have also delivered a more linear delivery, so despite the breaks in traction it doesn’t feel as if the unit is dumping all its torque on the road in the same way as in an AMG does.

Arguably the best part of the engine is the noise. It sounds a little subdued in Sport, but switch to Sport+ or race and the V8’s sonic potential is uncorked. The changes to induction and exhaust deliver a richer, more cultured soundtrack than the bombastic NASCAR bellow you get with this engine in a Mercedes. There’s a pleasant burble at idle that builds to crackling roar at the redline that’s pure Aston Martin. The noise is all the more remarkable when you consider the oddly small pea-shooter tailpipes of the standard exhaust – a louder sports system will be an option.