A single 5.2-litre V10 engine is the jewel in the R8’s crown that’s perfectly matched to a slick dual-clutch box

The physical and metaphorical heart of the R8, the naturally aspirated 5.2-litre V10, is largely carried over from the old car, but some rummaging around in the ECU has liberated an extra 10bhp, taking power to a heady 613bhp for Performance models delivered at 8000rpm, and it will rev to 8700rpm before the limiter steps in. Peak torque is 428lb ft at 6500rpm, but short gearing means this isn’t the problem you’d think. The V10 quattro and RWD have lesser peaks of 562 and 533bhp respectively, but torque only drops slightly to 405 and 398lb ft.

The V10 in all models is matched to a transmission that’s happy to help you indulge in the engine’s insatiable appetite for hard work. The seven-speed S-tronic twin-clutch fires home ratios fast and slickly, while downchanges are reported with a neatly executed blip of the throttle – it’s a shame the paddles are so small and cheap-feeling. Leave it to its own devices and it will mooch with the best of them, shifting up early and smoothly. 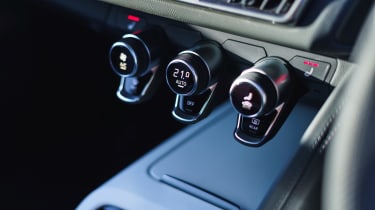 Connected to all but the entry-level RWD is the brand’s quattro four-wheel-drive system. Effectively a back-to-front Haldex set-up, it can vary torque to suit conditions, even sending plenty to the back axle for some lairy corner exit entertainment if that’s your thing.

The new R8 is largely unchanged over its predecessor, which means it’s still underpinned by the same Audi Space Frame (ASF) structure that utilises strategic bits of carbon within the largely aluminium construction. Off this hangs the familiar double wishbone suspension, with magnetorheological dampers optional on all but the top-spec Performance Carbon Black model.

Both the standard electro mechanical and the optional dynamic steering set-ups get a faster rack than on the previous R8, the latter having been extensively recalibrated. Interestingly, when you put the car in its Performance mode (there’s also Auto, Efficiency, Dynamic and Individual) it locks the rack into its quickest setting. Available for the first time as an official option is a Michelin Cup 2 tyre – standard rubber is Pilot Super Sport 4 S. Developed specifically for the R8, the extra-sticky rubber required a subtle remap of the ESP, as much to take account of the extra braking performance as for any increase in lateral grip.

The carbon-ceramic front brake discs are now 380mm (standard cast iron items measure 365mm, while the rear diameter remains 356mm regardless of material) and save just over 15kg of unsprung mass. Speaking of which, there’s now the option of an aluminium carbon-reinforced front anti-roll bar that shaves a further 2kg off the overall weight – although it’s no stiffer than the standard steel item.