Largely unchanged from the previous car, the RS3’s interior straddles that line between sporty and overwrought depending on which option boxes are ticked 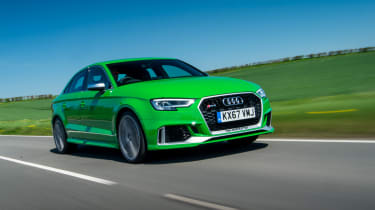 At just over £5k shy of fifty grand it should be easy to write off a five-door hatchback as being slightly ridiculous, but Audi has done its best to justify its tag with a high-quality cabin and a garnish of sporting elements. The basic A3 already has a well-designed cabin, but the RS3 lifts the ambiance further. However, it's difficult to ignore the fact that the Audi's basic design is approaching five years old now and the cracks are starting to show. There's nothing wrong with the execution, but items such as the pop-up infotainment screen looks small and dated in the era of wall-to-wall TFT screens.

That said, Audi has tried to make the cabin more modern, with the biggest change on facelifted versions being the appearance of Audi’s Virtual Cockpit, a 12.3-inch high-resolution screen that has now spread across a majority of the Audi range. On top of this, the RS3 adopts the same Alcantara clad flat-bottomed steering wheel as the TT-RS. It may sound like a small thing, but Audi’s work on miniaturising the steering wheel boss goes some way to keeping the interior looking sharp.

Aside from these small changes, the interior is as it was before, that is to say very well built, fairly sophisticated in feel, and easy to navigate. Standard in the RS3 is Audi’s top spec MMI sat-nav and media system, complete with Google mapping, smart phone mirroring and a BOSE sound system. The optional Bang & Olufsen system is also excellent and worth the extra £495.