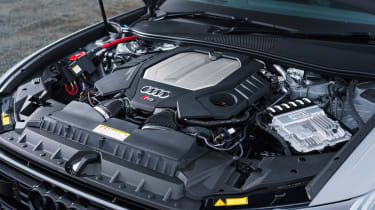 There’s a proper motor under the bonnet of this RS6 – a four-litre V8 with a pair of turbochargers strapped to it, thumping out 592bhp and 590lb ft of torque. That’s about 150 horses and 160lb ft more than the original, 2002 Audi RS6 produced.

To that Audi attaches an eight-speed torque-converter automatic gearbox, which drives all four wheels through a Torsen centre differential and, on UK models, a standard Sport differential at the rear axle. The centre diff has a 40:60 torque split front to rear, but in certain situations can direct up to 70 per cent of the power forwards or as much as 85 per cent to the rear wheels. 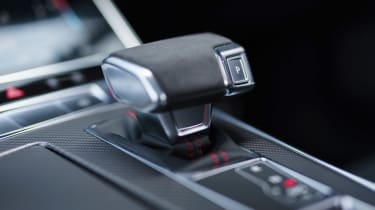 The RS6 also includes Audi’s 48V mild-hybrid technology, though it really is fairly mild, less about supplementing drive and more about reducing alternator load and using the big 48V electrical system to handle minor systems instead of drawing all that power from the engine. Another concession to fuel efficiency is cylinder deactivation, which is pretty much imperceptible to the driver and as we’ve discovered on longer trips, relatively effective at calming the RS6’s long-distance fuel consumption.

The other key technology for the RS6, as used in certain conventional A6 models (as well as the A7 and A8) is rear-wheel steering. It has the ability to turn the rear wheels five degrees in the opposite direction to those at the front at low speeds, and up to two degrees in the same direction above 62mph. It’s not a fixed ratio either, with deeply complex electronics determining how far the wheels should steer based on factors such as road speed, cornering load, driver input and more.

Finally, there’s the suspension set-up – a dedicated Audi Sport variation on Audi’s air suspension as standard, with a more conventional coil-sprung and adaptive damper combination, dubbed Dynamic Ride Control, as an option. Air-sprung cars should be the more comfortable combination, with greater control from the adaptive set-up.