Mighty off the line, but the V8’s so refined it doesn’t feel quite as quick as you’re actually going. 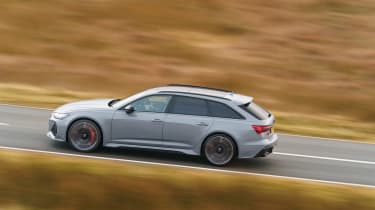 It’s difficult to imagine wanting more performance from something that can carry a family of five and their hound. Despite weighing in at 2075kg, the RS6 will sprint to 62mph, with little driver effort, in 3.6sec. Flat-out it will top 155mph, though Audi will lift the limiter to 189mph if you ask it nicely.

From behind the wheel the figures feel less dramatic than you’d expect, simply because the RS6 makes it so easy. It’s very much a car that’ll press you back into your seat, and its real party trick is replicating that mighty off-the-line acceleration even when the surface is wet or greasy – with all-wheel drive, a limited-slip differential at the rear and 275-section tyres at all four corners, traction is not an issue. But so simple is the process, it all feels surprisingly serene. 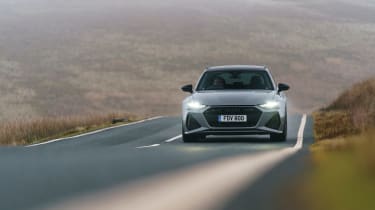 The V8’s natural refinement plays a part too. While it becomes more vocal at higher revs and emits a traditional V8 note under hard acceleration, it’s a smooth and cultured unit and in everyday driving almost fades into the background.

Response is slightly delayed by the machinations of the gearbox, which can take a few beats to deliver its power to the wheels off the line, or if you ask it to kick down, but switch to manual mode and you can stonk along quite nicely. Shifts are quick, though Audi has a little still to learn when it comes to theatre – the paddles behind the wheel feel pretty ordinary given the drivetrain they’re controlling