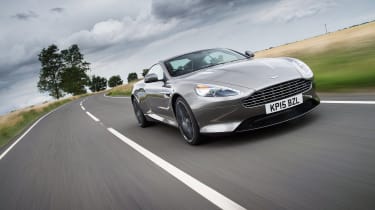 In a world of Audi R8s, McLaren 570Ss, Porsche 911 Turbos, Bentley Continental GTs, Mercedes-AMG GTs and S65 and even Jaguar’s F Type R, it’s easy to dismiss the DB9 as past its best and trailing it rivals. But it’s a more elegant GT than the Bentley and S65, more refined than the F Type and less highly strung than the Audi, Porsche and McLaren.

After a dozen years in production the DB9 still turns heads and inspires its driver to enjoy the thrill of driving and soak up that unique sense of satisfaction that only a V12 engined Aston Martin can deliver.

It wasn’t perfect by a long shot, but it had bags of character and rewarded its driver in a way few of today’s more efficient, powerful, quicker and superior rivals can.

Performance and 0-60 time > Held back by the lack of lack of launch control and an old-school gearbox, the 0-62 time is leisurely considering the engine, but not representative of real world performance.

Engine and gearbox > Both are decidedly old-school, and that is a good and bad thing. The sonorous engine is lovely, but held back by the slow, dim-witted gearbox.

Ride and handling > Definitely living up to the GT bit in its name, the DB9 is no track car, but still entertains on the road while not compromising on its cosseting nature.

MPG and running costs > If you need to ask, you probably shouldn't. The old-school bit of the engine extends to its (lack of) efficiency.

Interior and tech > Lined in Britain's finest leather, the interior is a lovely space peppered with ancient tech and disappointing ergonomics.

Design > Unlike so many other parts of the DB9, the styling has stood the test of time and looks as sophisticated and luxurious as it ever did. 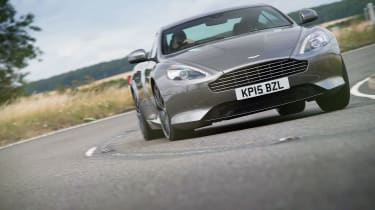 The DB9 was on sale for a total of 12 years, meaning that current values vary massively depending on age and mileage. As little as £30k will get you into an early car, although build quality can be patchy on some models. Values then rise to as much as £120k for this GT version with all the bells and whistles.

Its standard specification is generous, as you’d expect, and includes an interior that wants for nothing in the leather department, features electric seats with side airbags and memory function, alcantara headlining, a 700-watt Premium audio system, sat nav (it’s hopeless, buy a TomTom), a rear parking camera and power folding and heated exterior mirrors to name a few of the standard fixtures and fittings.

The most natural rival is Bentley’s recently updated Continental GT, including the security of four-wheel drive for those who think a car weighing 2350kg needs such a thing.

Ferrari’s fantastic GTC4 Lusso is also four-wheel drive and seats four. Or there are Mercedes’ S63 and S65 coupes.