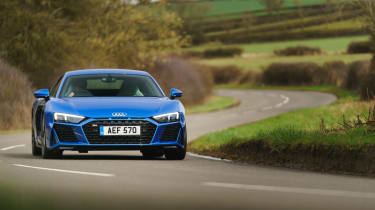 In the best tradition of Audi's design language, evolution rather than revolution is the order of the day with the R8. Remove every one of Audi's four-ringed badges and it could be nothing other than the old car's successor, though one of that car's most distinctive visual features - the prominent side blades between the doors and rear wheel arches - is nowhere to be seen. Weirdly, they've since ended up on the C-pillar of Audi's Q2 compact crossover instead.

For some that'll make the new R8 less distinctive than its predecessor, but there's little to fault with the revised nose and its sharper, more aggressive appearance – and the full-LED headlight units (laser high beams are optionally available). 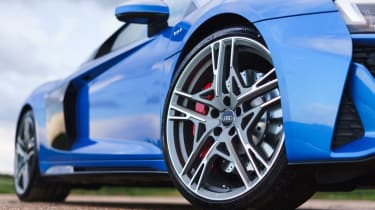 Recent changes in the facelift – most notably an urQuattro-style three-vent nose treatment, new headlight elements, and different grilles for a wider appearance – improve things, but most of us here reckon the original R8 was more attractive.

But we're picking nits. In a vibrant colour the R8 attracts attention wherever it goes, and most of that attention seems to be positive. It may still be difficult to reconcile the sensible Audi badge with the supercar it sits on, but the R8 undoubtedly has supercar styling and always looks low, sleek and dramatic.