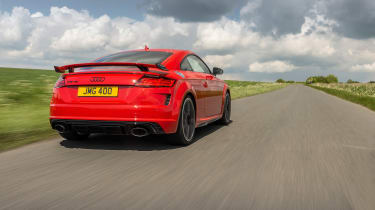 As we’ve mentioned, traction off the line is deeply impressive. To activate the launch control you need to be in Dynamic mode, with the transmission and ESC both in Sport. Then it’s simply a case of holding the RS on the brakes with your left foot and pushing the throttle all the way through the kickdown to the end of its travel. Then, with the revs steady at about 3500rpm, you just release the brakes.

The claimed time for the sprint to 62mph is 3.7sec, but we’ve recorded a 0-60mph time of 3.4sec. That’s quicker than the 3.5sec evo once recorded in a Ferrari Enzo, and as near as dammit McLaren F1 quick. Madness. Once up and running, the TT RS does still suffer some turbo lag, but commit and it is every bit as fast as the figures suggest, ripping through the seven short ratios with an urgency that’s unmatched this side of a Porsche 911 Turbo.