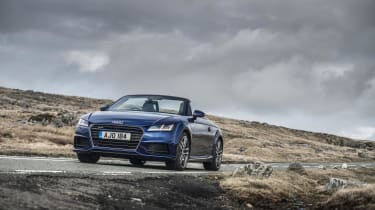 Based on VW Group’s MQB platform, the latest TT is the shortest wheelbase car to use these adaptable underpinnings, yet compared to the outgoing TT, there’s still an extra 37mm between the axles, which helps handling and ride comfort. Throw in the latest Haldex-based quattro system that can now push 100 per cent of the torque to either axle,and it seems entirely possible that the latest TT might finally be in a position to show its wilder side.

Ironically, when we drove the first TT way back in issue 001 of evo, the thing that unnerved us was startling lift-off oversteer, but subsequently the TT has been a less than exuberant little coupe. ‘If you’re into clinical speed, it really is effective,’ said Jethro Bovingdon in issue 094 after driving the second-generation TT for the first time.

"Theres an energy and and alertness o the TT's responses - a precision to its steering and a sense of agility thats not been preset in previous iterations... By trail-braking into corners it is possible to adjust the TTS's attitude, so you don't have to live with acres of terminal understeer. It's a very narrow window of adjustability though, and at corner exit the TT just feels like a front-wheel-drive car with infinite traction, rather than one that can be balanced under power"-Dan Prosser evo 209 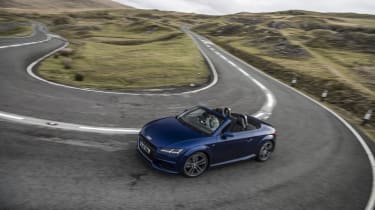 In Dynamic mode, nothing much seems to have changed, with the TTS at least. That the car is so well tied-down is impressive but also dynamically very dull. On the right roads, you can feel the Quattro drivetrain more eagerly pushing power to the rear axle, but the means to really exploit and enjoy it simply isn’t there. Lesser models than the TTS simply find themselves having this dynamic wick turned down even further, never feeling anything less than hugely safe and clinical, while straight line performance is simply reduced.

There is, however, a decent enough fix for this less than involving driving experience. Go into Individual mode and, leave everything in Dynamic, but switch the dampers to Comfort. With the suspension relaxed, the whole car is able to move around enough to bring it alive. The steering remains lacking in real feel, but with some roll in the corners and some dive under braking and some squat under acceleration, you can adjust the attitude of the TTS nicely.

These chassis settings are particularly effective on the way into corners, where a touch of trail-braking really locks the nose into the apex and gets the rear rolling round slightly behind you. Get back on the throttle at this point and it’s even possible to have the TT driving out of a corner with a smidgen of oversteer. It’s certainly not the easiest attitude to coax out of the car, but it is eminently possible. Which is fun.

In the UK we tried the car on Bridgestone Potenza S001 rubber rather than the Hankooks that have been fitted to previous TTs we’ve driven. The biggest difference is a pleasing reduction in road noise, but they also felt a little more malleable and progressive, so we would certainly recommend them. 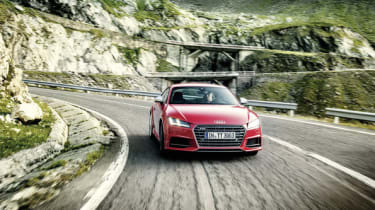 Although the TT convertible has a fabric roof not a folding hard top like the SLK, the refinement on motorways and longer journeys is very impressive. You obviously lose the practicality of the small back seats that the coupe has, but with the canvas folded away you get all the joys of the wind in your hair (although there really isn’t much ruffling if you’ve got the windows up).

Having now driven it, the TT RS is an unbelievably quick if slightly unengaging machine. The five-cylinder soundtrack is nothing short of fantastic, but the RS falls just short of being really brilliant. The issue lies with its lack of a torque vectoring rear-diff for its four-wheel drive system, which just holds the car back from being really adjustable.

We had the opportunity to drive the TTS at the Ascari circuit. Completely un-prompted, the Audi test driver that was on hand suggested that we put the TTS into Auto rather than Dynamic mode. We showed her what we’d done with the dampers in the Individual settings and this got an even bigger thumbs-up. Clearly we’re not the only ones that think the car is better when not completely tied down.