The highest performance 3-series, the M340i xDrive, is yet to hit our shores – it’ll go on sale later this year – but when it does it’ll offer the sort of figures that were the preserve of the previous generation M3. With 369bhp on tap it takes 4.4sec to accelerate from 0-62mph, its off the line traction aided by its standard fit xDrive all-wheel drive set up. We’ve only briefly driven a pre-production example so far and those miles were limited to an on-track session but it demonstrated a great deal of talent which we hope will be translated to its on-road ability, too.

Until the M340i makes its debut the fleetest 3-series is the 330d. Like the vast majority of 3-series models it comes with an eight-speed auto (only the 318d and 320d can be ordered with a six-speed manual) and posts a 0-62mph time of 5.5sec in rear-wheel drive form, or 5.1sec with xDrive. If its benchmark sprint times are impressive its meaty mid-range shove is what really separates the 330d from its lesser siblings – it’s very rapid on the move and is even pretty tuneful for a diesel, too.

Where the 330d makes good use of its six-cylinder engine – the only six-pot in the BMW 3-series line up until the M340i arrives – the 318d and 320d both feature the familiar four-pot as used in the 5-series. For an entry-level model the 318d is reasonably perky with a 0-62 time of 8.4sec (8.3 for the auto), but it’s the 320d that makes far better use of its extra power, recording a 7.1sec time for the manual and 6.8 for the auto. Add xDrive for a 6.9sec time. On paper that looks pretty quick for a 2-litre diesel, but such is the 3-series’ refinement that it perhaps doesn’t feel as rapid as its figures suggest. 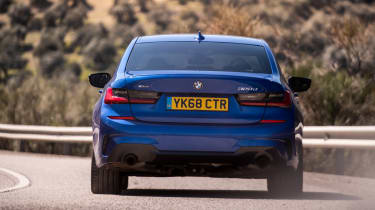 But what about further petrol offerings? There are three; 320i (with or without xDrive), a 330i (rear-drive only) and the solitary plug-in hybrid, the 330e. All use the same 2-litre four-cylinder turbocharged engine in different states of tune, with the 330e’s backed up with batteries and an electric motor. The 320i records a 0-62mph time of 7.1sec (7.6 with xDrive) while the 330i is significantly quicker at 5.8sec. The extra weight of the 330e adds 0.1sec to its time.

While you might expect a bit of sparkle from the 2-litre petrol unit it’s not the most characterful ’four BMW’s made and while it delivers the goods and is keen to rev for a turbo motor it’s not going to make the hairs on the back of your neck stand up. Perhaps a manual ’box would help, but that’s not an option with this latest 3-series.

The Touring models will be added to the range later this year and broadly speaking they use the same range of engines with 0-62mph times a smidgen slower than the saloons thanks to their additional weight.