BMW has done a stellar job with the i8's design. Perhaps one of the few cars to ever truly live up to its concept, there is nothing else on the road quite like it.

For starters, there are the distinctive 'U' shaped daytime running lights, which immediately make the i8 stand out. Really though, it's the complexity of the body panels, combined with the black belt that runs right down the centre of the car, which is most impressive.

At the back you have a pair of flying buttresses which sit above the brake lights. These then wrap around to the front of the car and spread out wide across the bonnet, giving the i8 a wide and low down road presence.

Then there is the distinctive BMW kindey grilles, albeit this time they aren't grilles at all, instead pieces of gloss black plastic framed by blue accents. This theme of blue continues throughout the car, but never is it used to excess, instead accentuating design features and leading your eye to them. 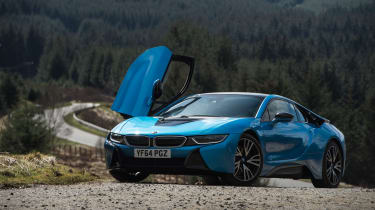 Of course there are the scissor doors also, which just adds to the drama and theatre of the i8. In fact, its design really is almost impossible to fault, purely because it's so ambitious.

The only issue we have really is the 215/45 rear tyres do slightly make the car look like it's standing on stilts. Really though, there isn't a single car on market right now we can think of that will turn heads like the i8.

BMW recently announced a new Protonic Red limited edition version of the i8. We're not entirely sure the red colour scheme - echoed on double-stitching throughout the car's cabin - entirely suits the i8, which otherwise retains the standard car's plug-in hybrid drivetrain.