The i8’s performance is quite frankly astonishing for a car with a three-cylinder engine. The combination of a 227bhp petrol engine and a 129bhp electric motor means it can deliver an M3-rivalling 0-60 mph time of 4.4 seconds.

The combined hybrid system also generates 420lb ft of torque with the electric motor generating the entirety of its shove immediately. That means that the i8 actually ends up feeling a bit quicker than it reads on paper.

What’s most impressive with the performance of the i8 is how the two systems work together to create a very clever four-wheel drive setup. The electric motor drives the front axle, while the petrol drives the rear. They both fill in for each other, with the electric motor providing power at the lower end of the rev range and the turbo three-cylinder unit filling in at the top. 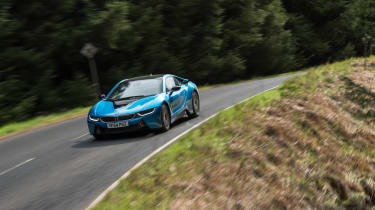 This distribution of the drivetrain also helps translate to a perfect 50/50 weight distribution. As for the i8’s weight itself, the car manages 1485kg despite its 7.1 kWh lithium-ion battery. This is thanks to its clever hybrid carbon-fibre/aluminium structure, which saves weight, keeps occupants safe and is nowhere near as expensive as a full carbon-fibre tub.

BMW’s TwinPower 1.5-litre three-cylinder delivers a soundtrack that does the i8’s looks justice. Obviously a large part of that comes from cleverly synthesised audio work, but in a car as ‘digital first’ as the i8, it’s more forgivable than in the likes of the M3 and M4. Just don’t open the windows in a tunnel and expect your ears to be blown off, as a lot of the noise the i8 makes is a cabin-only affair.