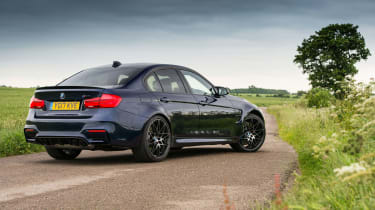 Inside, the M3 doesn’t have the pizzazz and glamour of most rivals; there isn’t the flamboyant luxury of the C63, nor is there the same tech-fest that you’ll find in modern Audis, but it's extremely well built and when specified cleverly, can still feel special. That’s not to say the F80’s interior isn’t pleasant, it is, it’s just not remarkable. The materials and plastics are of a good quality, the dials are clear and fuss free, it’s logically laid out while some carbonfibre panels help it look relatively sporty. 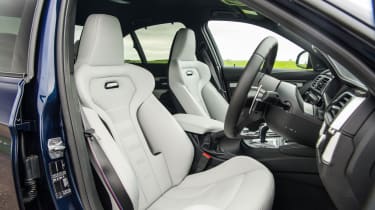 The M3 is very easy to get comfortable in; there’s a good range of movement from the steering column as well as the seat and you can sit low with the wheel close to your chest, so even though this M3 doesn’t have any direct racing pedigree you do feel a bit like a touring car driver. The Competition Package brings with it new seats, which feel almost identical to the standard ones – there’s the same range of movement and no more support – but they do have flying side bolsters and look fantastic.

The M3’s infotainment is dealt with by BMW’s much copied iDrive system. It’s perhaps not as logical as a touchscreen set-up – you can’t simply prod what you want on screen – but it’s still very easy to use while the dial and buttons are less frustrating than a slow, inert interactive screen.