In the face of talented rivals, the M4 remains a solid, sophisticated option for keen drivers

The latest generation M3 and M4 are very quick cars indeed. In our own testing the car managed to crack 100mph in just 8.6 seconds, which makes it as quick as a Ferrari 430. Cars equipped with optional DCT gearboxes can hit 62mph from a standstill in just 4.2sec according to BMW's own official figures. Although the six-speed manual version will reach 62mph in 4.3 seconds, and so puts it slightly behind the DCT model in acceleration terms, it still remains a deeply respectable figure for a 1595kg, rear-wheel drive car.

BMW claim the lighter, more powerful M4 GTS wearing Michelin Pilot Sport Cup 2 tyres can reach 0-62mph in 3.8sec. However, we recorded an even quicker time of 3.7sec and 0-100mph time of 7.8sec.

While bhp figures might not be as considerable jump as you'd expect over the old E92 M3 coupe, the acceleration figures are definitely a cut above. The old, naturally aspirated M3 coupe for example took 10.3 seconds to hit 100mph according to our timing gear. 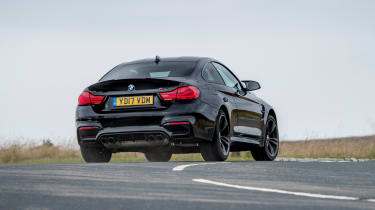 A sophisticated launch control system – which the driver can adjust to suit the grip levels – helps the new car to get away from the line as quickly as possible every time.

Top speed is electronically limited to 155mph in all versions except the GTS which is limited to 190mph.

The latest generation model might have lost the previous versions’ soulful, high-revving V8, but the switch to turbocharging has lifted it to a new realm of performance. With considerably more torque the new model is not only faster off the line, but significantly more accelerative through the gears, too, which makes it feel much faster in real-world use.