Three cylinders, 1.5-litres and a turbocharger – all fixed to a six-speed manual gearbox. Suspension gets fancy directionally-wound "force vectoring" springs

It’s out with the old 1.6-litre four-cylinder turbocharged engine and in with a new 1.5-litre turbocharged triple for the new ST. It’s definitely a step forward in terms of cleanliness and economy, at least on paper, with the new unit allowing you to travel an extra mile on every gallon of fuel and using a petrol particulate filter to meet the latest Euro 6.2 standards.

The engine also uses cylinder deactivation technology – the first on a three-pot – with cylinder one shutting down at low revs and low loads to the benefit of economy, firing back up in 14 milliseconds when more torque is required. It’s imperceptible to the driver, and ST owners are less likely to experience it anyway than their counterparts in less sporty Ford Focuses using the same powerplant…

In numeric terms the new ST develops 197bhp and 214lb ft of torque, both of which shade the ST’s standard predecessor, though there’s less of a difference to the ST200 and various Mountune-fettled STs. 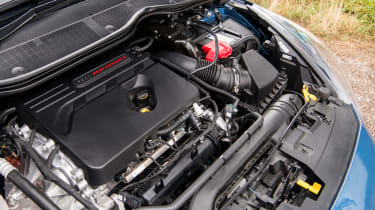 To this new three-pot Ford attaches a six-speed manual transmission, with the option of a Quaife mechanical limited-slip differential to handle drive to the front wheels. STs feature both electronic sound generation inside the cabin and an active exhaust, and the behaviour of both varies depending on the driving mode (Normal, Sport and Track) selected.

In terms of its layout and structure the Fiesta ST uses much the same ingredients as other cars in this class, but throws a few herbs and spices into the mix to give the car its own flavour. Thus you get a fairly conventional chassis set-up: steel monocoque with MacPherson strut front suspension and a torsion beam rear, with electrically assisted rack and pinion steering.

But you also get Ford’s patented ‘force vectoring springs’ – directionally-wound and non-interchangeable coil springs as an alternative to a Watt’s linkage. The aim is the same – improving lateral location of the axle – though the ability of the springs alone to apply vector forces to the suspension save the 10kg that Ford says a Watt’s linkage would add.