The new ST isn’t short of performance. Make use of the launch control function (engaged via the steering wheel buttons) and keep your right foot pinned as you shift through the gears (thanks to flat-shifting technology) and you should match Ford’s claim of a 6.5sec 0-62mph time and eventually a 144mph top speed.

The three-cylinder engine definitely has a different aural character to the old ‘four. Not an unpleasant one, at that – it’s definitely among the angrier threes we’ve heard, and while Ford uses sound generation to enhance its note inside the cabin, it’s not too artificial – and the active exhaust out back is making a ‘proper’ noise anyway.

Much of the time it doesn’t really sound like a three-cylinder, so different is it from the usual economy car fare, but nor does it sound like a four-pot. We still prefer the raspy, induction-noise-heavy note of the old four-cylinder, but we could definitely get used to the triple. The only downside is that the valved exhaust can drone at certain revs, particularly if you pay heed to the car's gearchange indicator and its desire to have you shuffle along in low revs and high gears for economy. Ignoring it smooths things out and makes the cabin a little quieter. 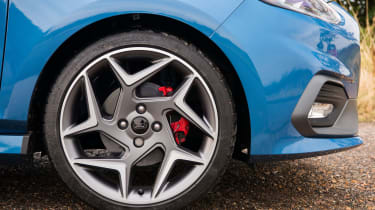 There’s little difference in the way the new engine delivers its power, either, with good throttle response from low revs all the way to the upper reaches of the rev counter. It doesn’t quite cover the last 1000rpm or so with the verve of the old car, though flick through the gears quickly enough and there’s sufficient torque to chirp the tyres even on the change to third.

This much power in a small car still feels ever so slightly unhinged, too, making the ST feel exciting before you’ve even reached a corner. The limited-slip diff can make the steering a little fighty from low speeds, and particularly on bumpy surfaces, but that’s all part of the thrill of a compact hot hatch like this. Thankfully, the brakes are up to the task of shedding all that speed, and while they began grumbling after a few hot laps around the Goodwood race circuit on the model's launch, actual braking performance remained fairly consistent.

Aston Martin has finished its first DB5 Goldfinger Continuation; the other 24 James Bonds to receive their cars soon
Visit/mercedes/s-class/22543/new-mercedes-s-class-interior-teased-before-reveal

The next S-class, Mercedes’ archetypal luxury saloon and tech leader, is ready for launch
Visit/skoda/202145/full-2020-skoda-octavia-vrs-engine-range-detailed