A big improvement over the old car. Grippy Recaro seats are welcome, improved dash and infotainment set-up even more so

The interior of Ford’s previous Fiesta wasn’t great even from the start, with a dashboard that looked like it’d been cribbed from an old Nokia, and as the competition quickly improved (particularly in terms of infotainment) the Ford trailed even further behind. ST models had great seats, but they always felt like they were mounted a little too high.

No such issues in the latest car. Its cabin won’t be remembered as a design classic, and isn’t as ruthlessly ordered as that of a Polo or as imaginative as a Mini – it does the job and no more – but it’s such a huge improvement on its predecessor that owners will have very little to complain about. 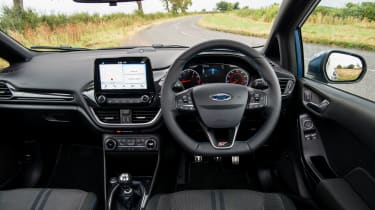 The ST still gets great seats, too, though those of larger frame may find themselves a little pinched – the Recaros feel like they’ve been developed for a racing driver’s physique. There’s plenty of adjustment in the seat and wheel, though, and you sit a little lower, for a cosier feel than before. The steering wheel is perhaps both a little too large in diameter and a little too thick in profile – the trend for fat wheel rims shows no sign of diminishing – but overall this is a good driving position, with decently placed pedals and a snappy gearlever a relatively short movement away from the wheel. One demerit is visibility – the steeply raked A-pillars and rising window line conspire to block your view both ahead and over your shoulder.

It’s a big improvement technologically, though. On the infotainment side a 6.5-inch screen is standard with Ford’s SYNC 3 operating system, with an 8-inch screen with navigation optional. A B&O Play audio system is also optional, while ST-3 models get a 4.2-inch TFT instrument cluster which conveys more information than the simpler clusters in the ST-2. Various safety systems are also included, while on the performance front you get technologies such as launch control, flat-shift gearchanges, and three driver modes – Normal, Sport and Track – with varying levels of steering weight, throttle response, exhaust noise and stability control intervention.