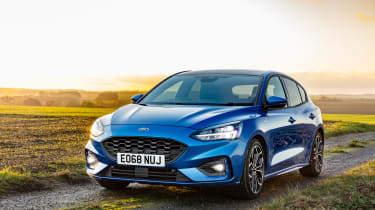 Ford has consolidated the Focus’s engine range by removing both the lowest and highest power engines and expanding into mild-hybrid tech. This leaves a single 1-litre turbocharged three-cylinder petrol engine available with or without mild hybrid assistance, and two four-cylinder diesels in  the range.

The fast-spinning turbo and flat torque curve are trademarks of Ford’s ecoboost engine architecture, and while they’re flexible and easy to drive it’s hardly speedy. Overall powertrain refinement is impressive too, however the typical rev-hang that so many three-cylinder engines suffer from is present.

The manual’s throw is short and direct with little slack and a tight, controlled movement while the auto which is a dramatic improvement on the previous Focus’s dual-clutch gearbox, which was slow to react and jerky between shifts. The new eight-speed torque converter is far smoother, quickly and decisively shifting through the ratios in automatic mode. 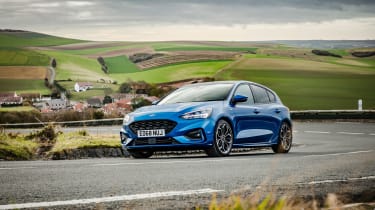 A second benefit of the automatic is the redesigned centre console as Ford has moved to a small Jaguar-like rotary gear selector opening up space in the centre console, but some may find it a little counter intuitive to use. Most models are also fitted with paddles behind the steering wheel to change gears manually, but it’s now that the changes can be sluggish and languid when you want to press on.

The diesels are frugal and relatively refined, but not class leading. They are quite happy to trundle along at very low rpm, which you’ll generally do anyway thanks to the long gearing. The automatic is a good match, too, and probably the preferable option to the manual if you’re more into a ‘relaxed’ driving style.