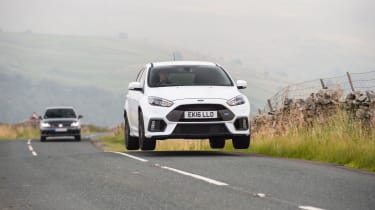 As all fast Fords have done, the third generation Focus RS punches above its weight, it delivers remarkable amounts of acceleration and speed for a relatively small amount of money.

The Focus RS produces 345bhp and 347lb ft of torque, that's enough to propel it to a maximum claimed speed of 165mph and we recorded a 0-60mph time of 4.7sec. Even though you can only get the Focus RS with a conventional manual, it still has a launch control system to help you get the quickest possible start off the line. It does however require you to abandon all mechanical sympathy and side-step the clutch then hammer each gear in. The Focus RS copes amazingly well with this sort of abuse, though. 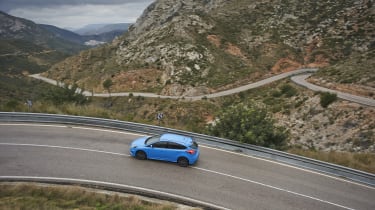 Our testing extended a bit further than just a 0-60 time. We recorded a quarter mile time of 13.5sec at a speed of 104.2mph. We also performed an in-gear acceleration test, and found the Focus RS takes five seconds dead to accelerate from 30mph to 70mph in third gear. To put that in context, that’s the same as 5-litre V8 Mustang.

As remarkable as most of the numbers are, there’s one that seems slightly unimpressive; the weight. The RS tips the scales at hefty 1524kg (although it was a little bit more at 1567kg, when we weighed it), that’s 162kg more than a Focus ST. A lot of that extra weight is likely the 4WD drivetrain, but without that, the RS wouldn't be as quick.