Quality and refinement have improved, and in-car tech is better too, if still not quite up with the best 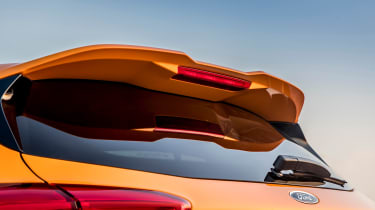 There’s little to complain about with the ST’s cabin design. The latest Focus interior is a marked step up in quality from its predecessor, and the ST carries this over with the addition of a few suitably sporty touches.

A set of figure-hugging Recaro seats make a return, and as before they seem to be shaped for a racer’s physique – those broader of waistline may feel a little squeezed. The major touchpoints are pretty good too, with good adjustment in wheel and seat. Some may find the flat-bottomed steering wheel rim a little chubby and the gearshift action a little notchy, but Ford has generally got the basics right, including well-spaced pedals.

It’s spacious inside too, and the 375-litre boot is much more generous than the mean little cubby of its predecessor – it’s 60 litres larger than before, five litres off the class benchmark Volkswagen Golf’s capacity and nine litres behind the Renault Mégane’s. Quality too has improved, the cabin feeling generally solid.

Ford’s in-car tech still isn’t the best in class though, despite the latest Sync 3 system again improving over that in the old car. The 8-inch touchscreen is easier to use, but still occasionally slow to respond and quickly gets overwhelmed by rapid inputs, such as typing in a postcode in the satnav