The 2-litre turbocharged four-cylinder engine that underpins the Civic Type R is the same basic unit found in the previous-generation car. Fundamentally a relatively conventional engine, the 1996cc DOHC four-cylinder utilises both VTEC variable valve timing and a high-capacity single-scroll turbocharger to produce its 316bhp and 295lb ft of torque.

It’s available on a plateau of revs between 2500 and 4500rpm, and it’s the torque spread throughout the rev range that provides the biggest point of contrast against Honda’s previous Type R engines. The unit itself features direct fuel injection, cast alloy pistons, forged conrods, and what Honda refers to as a lightweight crankshaft.

The engine itself isn’t totally free of lag – catch it off-guard and it can take some time to wake up – but once its lungs are full, the Civic fires you down the road at an almost ridiculous rate. The acceleration barely wanes at high engine speeds too, with a satisfying hard rev-cutout if you do brush the limiter.

There wasn’t much wrong with the gearshift in the FK2 – it was one of our favourite aspects of the car – but it’s been further refined here, and also includes a lower final drive ratio. Drive is once again deployed through a helical limited-slip differential to the front wheels. 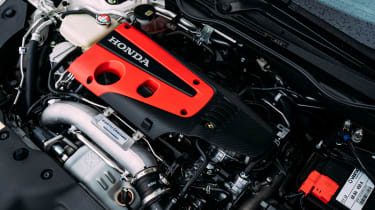 The body itself is very different from that of the previous Civic. While still a five-door hatchback, it’s longer, lower and wider than before. Despite being larger, the body in white is 16kg lighter than its predecessor, and 52 per cent stiffer (38 per cent like for like with the old Type R), while the centre of gravity drops 34mm lower. You sit lower too – by 50mm.

Honda updated the suspension too, with a new multi-link set-up replacing the torsion beam of the last two generations, while the suspension itself is more rigid to ensure it only moves in the direction the engineers intended. They’re comprehensive changes, and they have comprehensive effects.