Recent changes to the way fuel economy is calculated mean the Civic’s 33.2mpg figure is lower than its old 37-odd mpg, but don’t be fooled – the new WLTP figures are simply more realistic than before, and it’s entirely possible to attain 33mpg out on the road. Those same WLTP figures quote a low of around 25mpg, though we’d suggest you expect even lower, particularly if you’re inclined to take your car on track, while higher than 33 should be possible on a steady motorway cruise.

Rivals such as the Golf R and Audi S3 don’t yet have WLTP figures, so both crack the 40mpg mark when combined with a dual-clutch gearbox, but in our experience many of the hot hatchbacks at this segment in the market are roughly on par for economy, so running the Civic should be little more expensive than its rivals. 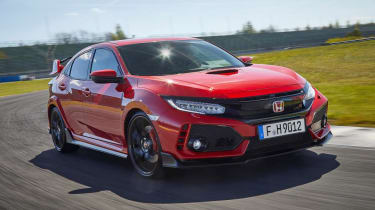 At least in terms of fuel, anyway. Our long-term Civic lost several wheels and tyres to pothole and road damage. While the Civic’s dampers may handle those 20-inch wheels and ultra low-profile tyres just fine from a ride quality perspective, they can’t cheat physics.