Honda Civic Type R review - ignore the looks, this is an astounding hot hatch - Performance and 0-60

One of the few elements carried over from the old car is the engine and gearbox. The 2-litre unit now develops an extra 10bhp, mainly through work on the mapping side of things and reducing back pressure in the exhaust.

Honda might not have chased the ultimate power output in the class, but let’s be fair, there’s nothing puny about 316bhp, particularly given that at 1380kg the Type R is significantly lighter, for example, than a Ford Focus RS (1524kg).

So despite the obvious disadvantage of three pedals and a gear lever versus a twin-clutch ’box when ranged against the stopwatch, and the traction limitations of front-wheel drive (although the Civic's lack of wheel scrabble and torque steer is almost otherworldly), the Civic’s 0-62 time of 5.7sec is entirely respectable, and edges out a manual Seat Leon Cupra 300 by two-tenths of a second. 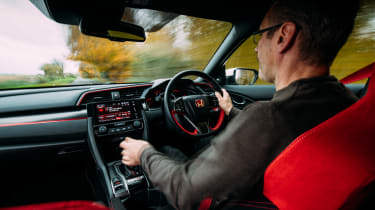 Top speed is impressive too. That bodykit looks less ridiculous when you consider the Type R can manage 169mph flat out. Not long ago we’d have expected that kind of top speed from proper sports cars – not least the original Honda NSX – and today you can do it, if you find a suitable stretch of empty autobahn, in a hatchback.

All the laggy behaviour and awkward resonances of the old engine have been banished. It pulls cleanly and strongly from around 2500rpm, then maintains that vigour unwaveringly to the 7000rpm red line.

The switch to a single-mass flywheel (compared to the dual-mass set-up of before), along with the much improved calibration, means that throttle response is sharp, the revs rising and falling notably swiftly, for example, when the clutch is in. It’s an honest, energetic power plant, with a breathy exhaust roar similar to that of an old Mégane RS and no hint of electronic fakery to the induction rort.