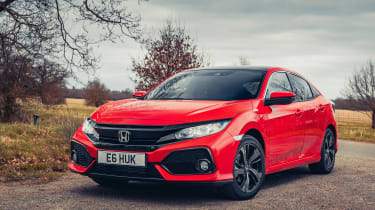 The Civic’s dramatic new shape belies significant changes to the car’s proportions. The new model is 30mm wider than before, sits 20mm lower, and there’s a full 130mm of extra bodywork end-to-end. Despite these new measurements, greater use of materials like high-tensile steel and clever use of welding has shed 19kg from the body-in-white, while torsional stiffness has improved by 52 per cent.

But this doesn’t even begin to approach the elephant in the room, which is the way this new Civic looks. The rather aggressive styling is attributed to Honda’s decision to base all hatch models from the Type R, rather than the other way around. The Type R might well be able to carry off its Batmobile looks thanks to the substantial performance on offer, but as a 1-litre model that takes nearly 11 seconds to reach 62mph in some forms, the eccentric design might be a little much.

The new saloon has more conservative styling, but with its toned-down looks are some bizarre proportions, as the basic shape doesn’t lend itself well to the longer three-box look.

Whether you like it or not is totally up to you, and compared to the fairly dull styling seen throughout most of the family hatch class, it does at least look distinctive, but we’d guess the design has turned off more customers than it has attracted. 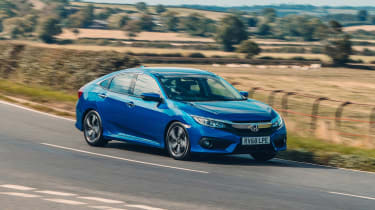