At a glance the Honda’s interior is all a bit Dan Dare, an array of digital dials and numerous buttons make it more starship than car. It gets easier to navigate with time, but it’s never as straightforward as the cabin of a Porsche 911. Still, it’s dripping with kit, from the touchscreen sat-nav and infotainment (fabulously counter-intuitive), soft leather trim and the really rather good ELS nine-speaker hi-fi. Yet the NSX’s commitment to the ‘everyday supercar’ tag hasn’t been forgotten completely. For example, the A-pillars have been designed to be thinner and less obstructive than in other modern cars. Using a rectangular steel tube design called 3DQ, the width of the pillar is just 89mm, compared with a claimed standard width of 124mm. The interior surfaces of the cockpit have also been designed to give more support where you need it when driving hard, namely the areas where the outside of your knees/lower legs want to rest.

There’s also decent room for the driver and passenger, the former getting more than enough seat and wheel adjustment to able to sit ‘just so’. Less impressive is the luggage carrying capacity, the need to house batteries and extra motors limiting boot space to tight 110-litre load area in the nose. 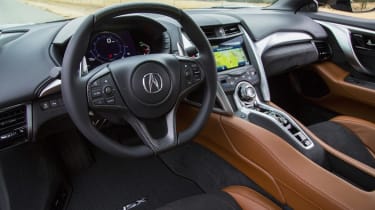