This is arguably one of the best-integrated petrol-electric hybrid systems out there, seamlessly blending both power sources to deliver a knockout punch. As you’d expect, the electric motors do their best work at low speeds, both boosting the low-rev torque of the twin-turbo V6 and delivering tenacious four-wheel drive traction. It’s low to medium speeds that the Honda is most impressive, firing out of slower corners with a controlled violence that borders on breathtaking. As speeds build and the trio of electric motors’ influence wanes the NSX feels quick, but not as rabidly so as, say, a McLaren 540C or Audi R8 V10, which is just getting into its stride as Honda’s urge begins to tail off.

We carried out a launch control in the NSX, which was unflustered and pretty effective. You simply select Track mode, push hard on the brake pedal, floor the throttle, watch the revs build to about 2200rpm at which point a message will appear in the dials and you release the brake pedal.

Honda claims a 0-62mph time of 3.3 seconds, which is a few tenths shy of big hitters such as the 911 Turbo (timed by us to 60mph in 2.8 seconds) and the R8 V10 (our figure to 60mph was 2.9 seconds), but it’s hardly a slouch. In fact, when we strapped on our timing gear we recorded 3.3 seconds to 60mph, so Honda can’t be accused of being generous with the truth. The electric motors create impressive initial thrust off the line, there is then a very slight drop in the shove as the 3.5-litre V6 takes over before normal service is resumed and the combined forces propel you all the way to as much as 191mph. 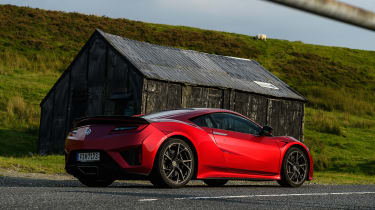