Just the one, 2-litre powerplant, and just a six-speed gearbox – just as it should be. Conventional underpinnings are used to unconventionally good effect 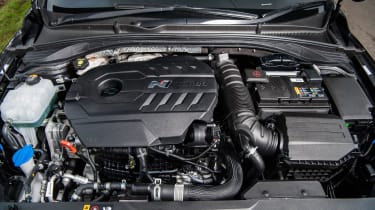 With the regular i30 N now dropped from the line-up your only i30 N option is the more powerful N Performance derivative, in either hatch or Fastback form, resulting in one state of tune to go with the single engine and gearbox option (until the DCT ’box arrives later this year).

Power comes from a 1998cc, turbocharged four-cylinder engine badged T-GDi, and the gearbox is a six-speed manual, with an electronically controlled limited-slip differential provided as standard. With 271bhp produced at 6000rpm, peak torque is the same and produced across a wider spread between 1500 and 4700rpm 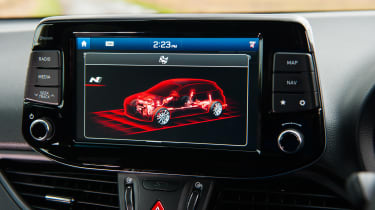 Structurally the i30 N is much like any other car in this class, with a steel, five-door monocoque shell and steel panels. In terms of hot hatchbacks its suspension set-up is also common, with MacPherson struts at the front and a multi-link rear axle. As part of the N’s upgrades over a regular i30 the chassis receives a strut brace between the rear suspension towers, as well as additional welding in the shell. Fastback models carry a little more of their weight towards the back of the car, which actually improves the front-to-rear weight balance and its shape improves its aerodynamic efficiency, too.

More reviews for i30 N hatchback

Electronically controlled and adjustable suspension is standard on both the hatch and the Fastback, while the electronically controlled limited-slip differential is standard on both models, too. Initially the Fastback’s chassis differed to that of the hatch, including longer bump-stops (from 55mm to 62mm), spring rates reduced by five per cent and a one millimetre thinner front anti-roll bar, but from 2020 these chassis changes, along with reduced camber on the rear axle and stronger gearbox and differential mounts, were made to the i30 N hatch, too. Brake discs measuring 345/314mm front and rear respectively are standard on both body styles.

Both hatch and Fastback are fitted with 8x19-inch wheels and 235/35 R19 Pirelli P Zero tyres, with electrically assisted power steering and 2.14 turns lock-to-lock.

Officially the i30 N weighs 1509kg regardless of bodystyle, although on evo’s scales a Performance hatch came in at 1477kg, comfortably within that range but certainly no lightweight.

All Ns get electronic sound enhancement. It’s loud, raucous and perfectly judged to the car’s character, with pops and crackles thrown in for good measure (but, pleasingly, sounding far from synthesised, as they feel in several other cars).

Engine and exhaust noise can be tailored via the Custom mode in the driving mode menu so you can switch it off when you want to fly under the radar. A firm, short-throw gearshift and good traction also both contribute to the entertainment factor of extending the N’s engine, while a reassuringly firm brake pedal pays dividends when it comes to shedding speed.

Share this on TwitterShare this on FacebookEmail
Go Back toHyundai i30 N review – verdict, prices and rivals
Continue ReadingPerformance and 0-60 time