Quite thirsty and 250-mile fills can get tiresome. Tyres can be expensive, too, but Hyundai’s five-year warranty is welcome 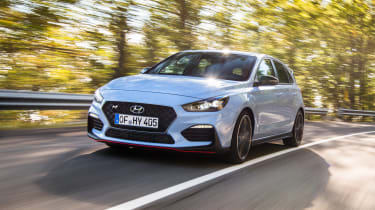 We’ve become familiar with modern cars failing to match their official combined consumption figures in normal driving, and while performance cars often get closer than many – they aren’t designed to be economical in a very specific set of conditions from the outset – the i30 N’s real-world fuel economy is still slightly disappointing for us.

Officially, it’ll do 34.9mpg in 247bhp trim on the WLTP cycle (around 5mpg shy of the old NEDC measurements), with the Performance coming in just under that at 34.0mpg, a figure matched by the Fastback N Performance. That's fairly close to reality, where you’ll be looking at mid-30s on a gentle motorway run and possibly just scratching the surface of 30mpg in everyday driving, with numbers plummeting the more performance you use.

That, on its own, wouldn’t be such a problem – plenty of other cars in this class will do similar, albeit few are quite so thirsty – but the 50-litre tank can often seem a little on the small side for a car consuming at that rate. In theory around 300 miles should be possible, but a realistic fill-up interval of around 250 miles can wear a little thin on longer trips. 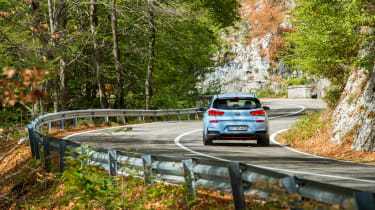 If you enjoy the performance then you may want to heed the cost of replacement tyres. The N’s 225/40 R18 Michelin Pilot Sport 4s (our 2017 tyre award winner) are around £108 a corner fitted from Blackcircles, while the 235/35 R19 Pirelli P-Zeros on the Performance come in over £150 a corner fitted from the same source.

Still, Hyundai’s five-year, unlimited-mileage warranty should redress the balance somewhat when it comes to ownership, and aside from a few satnav stutters and a pessimistic tyre pressure sensor our Fast Fleet i30 N Performance proved trouble-free over seven months of use.