Not as quick as some rivals, but all is forgiven for one of the naughtiest exhaust notes this side of a supercar. Great brakes regardless of trim level, with good pedal feel 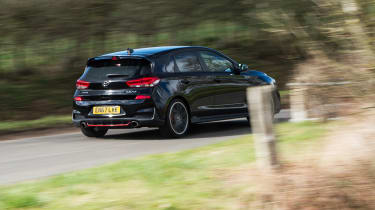 If there is a weak point within the i30 N’s dynamic package it’s the Theta 2-litre turbocharged engine. It’s not slow, far from it, but compared to the engines found in rivals it can be a little flat. While it revs cleanly to its redline, it doesn’t have the top-end enthusiasm found in the best VW or Peugeot units, while also lacking the huge mid-range punch of the latest Focus ST.

The engine’s relative lack of sophistication is partly due to its fairly humble beginnings in American-market mid-sized saloons and SUVs, making this feel like a potent engine put into a small car, rather than one designed specifically for the job.

Performance on paper is strong enough though, breaking the 155mph mark having passed 62mph in 6.1sec. Not class leading but on the money with its rivals. In our own performance testing, we recorded an i30 N Performance at 0-60mph in 6.6sec, and 0-100mph in 14.9sec. Those numbers are respectively 0.1 and 0.3sec off a Volkswagen Golf GTI Performance, and 0.6 and 1.1sec off the significantly lighter and similarly powerful Peugeot 308 GTi by Peugeot Sport