Six- and eight-cylinder engines were once commonplace in cars of this size, but now four-cylinders are the norm and anything more a real luxury. Unfortunately, it's a luxury the XF doesn't currently possess, with just a single 3-litre V6 diesel upholding multi-cylinder honours.

Everything else is found in four-cylinder format, under Jaguar Land Rover's "Ingenium" engine series and both petrol and diesel iterations. This starts at the bottom of the range with a 161bhp 2-litre diesel and climbs up to a 296bhp 2-litre petrol, with various outputs in between. 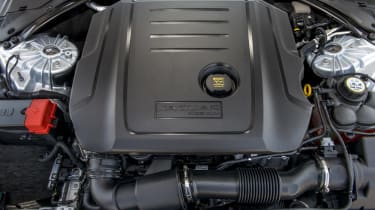 An 8-speed automatic is available across the majority of the range, while the lowest pair of diesels also come with a manual option. While evo is the first to champion the manual gearbox, in the XF we’d give it a wide berth. The shift isn’t particularly precise or intuitive around the gate, and feels far to rubbery in action rather than smooth and mechanical.

The auto is smooth and suits the car's character, and while it sometimes gels unhappily with the diesel engines it's much better suited to the petrols. In the diesels the 'box sometimes hunts for gears and changes down a few too many ratios rather than making the most of the torque on offer, but the petrols behave themselves with the gearbox and changes with the paddles are swift too.