Choose the 161bhp diesel XF with its six-speed manual gearbox and you'll just sneak under the ten-second barrier to 62mph, at 9.8sec, with a top speed of 132mph. At the other end of the scale is the 296bhp 2-litre petrol, which covers the same sprint in 5.9sec and runs into an electronic limiter at 155mph. The 3-litre V6 diesel isn't far behind though, at 6.4 seconds to 62mph and the same 155mph top speed.

The big diesel is not only the second quickest in the range but it’s also the pick of the bunch in terms of driving, too. That combination of its well-judged power delivery and wall of torque makes for a spirited and effortless performance level that is perfectly match to the gearbox’s eight ratios. Factor in its refinement levels and how the powertrain is always primed for whatever you ask of it and the 3-litre diesel makes for a quick, reactive and spirited drive.

The four-cylinder diesel engines do exactly as they say on the tin. The entry level 161bhp should only be considered if your hands are tied by punitive benefit in kind tax rates. The 161bhp struggles with the 1545kg kerb weight and the 280lb ft of torque is only available for a narrow 750 rev band making for a short burst of acceleration before tailing off.

The more powerful 178bhp/318lb ft model with the eight-speed ZF is the best middle ground, combining the cheaper running costs of the less powerful version with nearly 70 per cent of the performance of the more powerful 3-litre, twin-turbocharged XF diesel. However, as functional as the four-cylinder diesels may be they are unpleasant, uncultured engines to use. The rattle, unquestionably diesel noise borders on the offensive and they have a very narrow powerband. This is one of the reasons the eight-speed auto gearbox, the choice of gears means you can keep the engine in the most appropriate revs more easily, and you can keep the revs low. 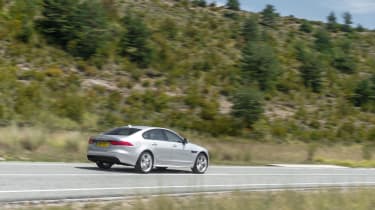 If you do decide to rev the engine to its limit not only is the lack of progress, compared to the racket it makes, frustrating but so is its low limiter. The rev counter shows a graduated red are where the engine won’t rev to rather than a definitive line. Looking at the dial you’d guess the limit was 4500rpm, but the engine won’t actually rev above 4250rpm. It’s just much better to keep it below 3000rpm, and save any disappointment.

The petrol four-cylinders are a better effort. In some applications they're nearly as unpleasant as the diesels, but here Jaguar has crammed in enough sound-deadening material and worked enough magic on their mechanicals that in 296bhp form particularly, it's respectably smooth and refined.

Performance is strong too, and while there's not much use exploring the very upper reaches of the rev range, the low- and mid-range urge makes up for it. The engine note is largely muted – as it should be for a car of this type – but there's just a hint of a sporty note in the background. It's not as engaging as the old supercharged V6, but nor is it bad.