Kia Stinger review – Don't be put off by the badge, the Stinger deserves your attention - Kia Stinger performance and 0-60 time 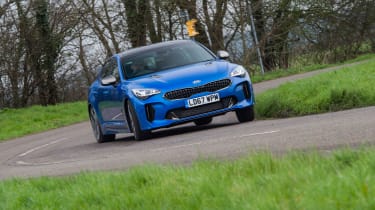 In the GT S Kia has produced its quickest-ever vehicle, reaching 62mph from rest in 4.9 seconds and going on to a most un-Kia-like 168mph. Just roll those numbers around in your head for a second and then remember what Kia’s road cars used to be like – whatever you think of the Korean brand’s image, the reality of Kia in 2018 is quite appealing.

A kerb weight of 1780kg means the Stinger GT S never feels quite as quick as it looks on paper, though the engine’s relatively cultured and undramatic delivery is also to blame – the Stinger is very much one of those cars that delivers its performance deceptively rather than boistrously.

It might be more engaging if the engine and four-exit exhaust system produced a more musical note, but the 3.3 will not be regarded as one of the great V6s by automotive historians. It’s certainly not bad and in general driving it’s plenty refined and punchy enough; we’d just like a bit more aural character. Perhaps that’s a job for the facelift, or the aftermarket. 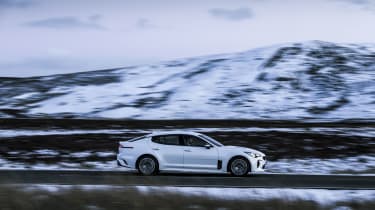 The eight-speed automatic transmission is a good partner for the V6 though, slurring changes smoothly when you need it to and responding with suitable urgency if you opt to shift yourself using the paddles on the back of the steering wheel. Our biggest gripe here is that there’s no way of locking the transmission to manual mode, so after around five seconds the ‘box will revert back to its automatic mode.

The gearbox works well with the 2-litre petrol and 2.2 diesel too, though neither engine is quite as satisfying in the Stinger as the V6. Much of that is down to the car’s weight, which hampers performance here even more – it takes 6sec to sprint to 62mph in the petrol, 7.6sec in the diesel – but both four-pots are even less comfortable spinning at high revs than their six-cylinder counterpart, and both are rather tuneless when you extend them, even in the Sport and Sport+ modes, which introduce a little more sound into the cabin.

If the petrol sounded more like it does in the Hyundai i30N – or the gearbox had shorter ratios to help the car get up to speed with a little more vigour – we’d feel warmer towards it. In some respects the diesel is actually better, the gravelly note in Sport and meaty mid-range suiting the Kia’s chassis, but as a drivers’ car it has to sit bottom of the pile, being just a little too workmanlike and discouraging a press-on driving style.