An all time classic 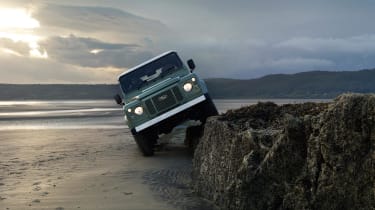 There are single and double cab body styles, but the only Defenders that are really classified as cars - just - are the Station Wagons. They start at around the £25,000 mark, which gets you the very basics.

A trio of special Celebration Edition run-out models were announced for 2015. The likely big seller will be the Heritage model that turns back the clock visually (mechanically it’s already there) with some retro styling and a ‘plush’ interior - these start at £27,800. Additionally there’s an Adventure Defender in G4 orange with the sort of off-road add-ons that Defender fans love, for just under £43,500. If you want the ultimate Defender though Land Rover is building 40 Autobiography models with a power hike to 148bhp and a full Windsor leather interior. That will cost you in excess of £60,000. Yes, seriously.

Direct rivals to the Defender are few; only the Mercedes-Benz G-Glass is similar conceptually, though even that makes the Defender look cheap as it’s headed upmarket and mad - in AMG guise specifically. The most obvious direct rivals are double-cab pick-ups such as the Mitsubishi L200, Nissan Navara and Ford Ranger, while a Mitsubishi Shogun or Jeep Wrangler would eclipse it on the road, and won't trail behind off it, either.