After such a sinewy exterior the P1's innards seem almost conventional. Stylistically, it isn't far removed from the humbler 650S (which itself has inspired the cabins of the more accessible 570S and 540C). Perhaps disappointing for some, but this ethos does play to McLaren's engineering-led, less flamboyant nature than its Italian competitors.

Not that the P1 lacks theatre next to conventional vehicles. One enters through McLaren's typical dihedral doors, slips over a wide carbonfibre sill and into a deep bucket seats fixed at an 'optimum' 28 degrees. They're ultra-thin and particularly light at 10.5kg a piece, yet shapely enough for comfort on longer journeys. 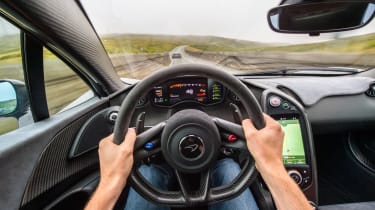 What isn't formed from carbon is swathed in Alcantara, including the F1-influenced (that's the Grand Prix cars, rather than its predecessor) steering wheel with buttons for the DRS and KERS, the latter in the form of the IPAS electric motor system.

The GTR is ostensibly a race car inside, at least in terms of feel and materials - being based on a production car, and lavished with the sort of attention you'd expect with something bearing the McLaren badge, it feels a lot less thrown-together than some racers. The normal McLaren steering wheel makes way for a more serious rectangular item much like that of the F1 cars, with a gummy finish to the grips that's clearly designed for use with gloves.