You’ve got to admire McLaren’s determination to create the ultimate supercar their way. They believe acutely in their clever interlinked hydro-pneumatic dampers, dubbed Race Active Chassis Control, that do away with anti-roll bars (which they’d say are bad for ride quality, heavy and a clumsy piece of engineering), so that’s what the P1 gets.

It allows the spring rate and damping force to be controlled at each corner and can be used to counter roll, pitch and heave. They are certain that their open differential with Brake Steer is a better solution than a mechanical limited slip differential (again heavy, prone to inducing understeer) and they’re willing to prove it even when the rear axle has to cope with 903bhp and 664lb ft. They stick to their principles absolutely and that makes the P1 a unique and fascinating car to drive.

Of course the P1’s ride and handling changes between distinct modes – one of them so extreme that it’s not actually road legal. In the road modes – Normal, Sport or Track (ironically) – the P1 feels supple, lithe and very, very light. The steering requires very little effort, the ride is simultaneously locked-down in terms of control and loose-limbed in the way it deals with nasty surfaces. It’s an incredible sensation and it breeds real confidence because there’s such excellent wheel control and instant response to steering inputs. You seem isolated from the worst of the road but completely in tune with it at the same time. 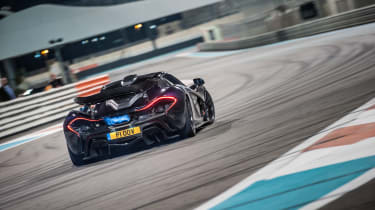 The clever Brake Steer system isn’t really tangible on the road but the P1 seems to have unnatural levels of agility and the all-pervading sense of lightness infects everything – the steering weight (sometimes it feels spookily weightless), the way the front end snaps onto line and the sheer body control. Really start to drive hard and the P1 becomes surreally manic, though. The gliding sensation disappearing to be replaced by massive front end grip, some tramlining under braking and fantastic traction. Here the Bake Steer effectively mimics an active torque-vectoring limited slip differential and the result feels completely natural.

Of course 903bhp is A LOT. And with just two driven wheels the P1 can be made to slip and slide at will. In fact ‘can be made to’ sounds like the P1 only gets down and dirty under duress. In fact it loves to slide around, the in-built gentle understeer easily swept away under power… Throttle response is excellent and although the ‘torque fill’ can’t always mask the heavily turbocharged nature of the engine, the P1 is so easy to drive right on the limit. It’s a staggering achievement.

In Race mode the chassis lowers by 50mm, spring rates effectively increase by 300-percent and the P1 morphs into its full aero-mode. The steering remains light but has more heft, the suppleness is replaced by an incredibly stiff set-up that rattles and rocks over kerbs but the bizarrely benign balance and the appetite for oversteer remains. It’s simply wild: Explosive power, black-out brakes, neck-straining grip and total immersion as you hustle the thing like an old M3. 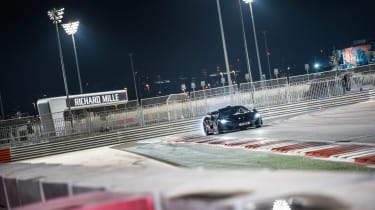 The GTR is altogether firmer, as you'd expect of a track-only car. Of course, we've managed to drive one of the handful of cars converted for road use (where it's the very definition of automotive escapism) but on track it's as beautifully balanced as the road car, transmits the same quality of messages through its controls, and punches even harder courtesy of that extra 83bhp.

'Road noise thrums around the cockpit, the clatter of the odd stray chipping reminding you of the P1's carbon construction. However, the main source of noise is the engine. There's an apparently endless repertoire of grisly, respiratory coughs, gurgles and hisses as turbo boost ebbs and flows. Depending on your mood, it can be tremendously exciting or rather annoying, but it does make the P1 feel like it's coming to life beneath your right foot.' Richard Meaden (P1), evo 205

'Reprogramming your brain to account for just how fast you arrive at the turns and then the slightly lower corner speeds than a full-on racer doesn't take long. And then I enjoy the very same things about the GTR as the P1 on track - its wonderful sense of agility, the superb feeling you get of exactly how much rear grip you have left, and the balance that wllows you to brake deep into corners to eliminate understeer and then point the car with laser precision under power.' Jethro Bovingdon (P1 GTR), evo 228