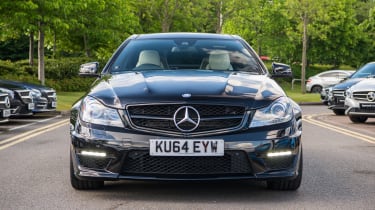 You can have an M3 for as little as £15k, although such examples are best avoided. For £20k you can get a clean low mileage car, and there’s the appeal of a manual box instead of the DCT.

The RS5 is no match for the C63 in our eyes, but it’s more GT and offers four-wheel-drive. It’s also similarly priced to the C63.

What the VXR8 lacks in premium appeal, it compensates for with big power and big character, akin to the C63. Starting at £14k, it’s a high-performance bargain.

‘The wild child on track at Bedford Autodrome was always likely to be the C63 AMG, being the most powerful and keenest to smoke a pair of rear tyres. And so it proves, though my main concern is getting the best from the old-fashioned auto gearbox. You have to plan and anticipate every shift. Suss that out, though, and the C63 serves up a generous helping of tail-led entertainment – not the most technically proficient way of circulating, but it puts a smile on your face. 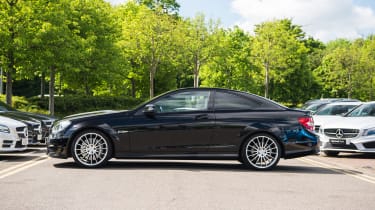 ‘It could just be a drag-racer, the C63, but it’s not. Not by a long chalk. “Although you can light the tyres up with a half-prod of throttle, it’s still exploitable and enjoyable, because it’s small and has probably the best steering feel of the group,” says Henry Catchpole. Indeed, the combination of so much power and a very able and rewarding rear-drive chassis holds immense appeal. “Brilliant at mooching and extremely capable and engaging right up to and over the limit,” says Richard Meaden. “Not as sharply focused as the M3, but this arguably makes it the warmer and more rewarding car in all but the most extreme driving. Love it.’

‘For three weeks before I bought the C63, I owned a Monaro VXR. I’d been inspired to get it by a mate who owned a Vauxhall VXR8. I liked the power and the noise, and I definitely wanted a V8. But then I went with another mate to collect his C63... It was better in every way: the way it looked, the way it sounded, the way it was built.

‘So I quickly did a bit of research into which model I wanted. My friend’s car was a pre-facelift version, but as I looked into it, I realised that a facelifted example would make more sense. It has an improved gearbox and the engine’s internals are better. 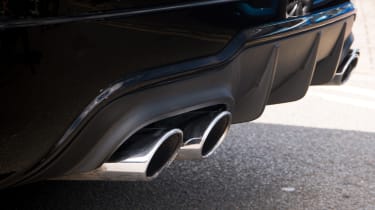 ‘I was lucky with my car. It popped up in the classifieds and was reasonably close, and I bought it within three hours of the ad going live. It’s a 2011 Edition 125 saloon in white, with the optional Performance Pack Plus. It’s awesome at everything: docile when you need it to be, so it just blends in with the traffic, and loud and ferocious when the mood takes you and the road conditions allow.

‘I’ve since modified it with IPE exhaust headers, sports cats and a remap, and the sound it makes is simply amazing. I’ve also fitted high-flow air filters and a carbon airbox, but I’m not really sure they’ve made much difference. Because I always intended to try a track day or two and a high-speed event in my C63, I immediately replaced the front discs and pads, which cost about £870. And after the trackday I needed another set of pads, which was another £175.

‘The Terminal Velocity event I went to was on a 3.1-mile RAF runway; standstill to however fast you can go. I hit 173mph but I was hoping for more – the run was into a headwind and severe brake fade made me nervous of when to back off. But I’m going back hoping to be quicker. ‘Would I ever replace it? With what? To go any faster I’d be spending double the money.’