Mercedes-Benz C-class review - Can it take on the mighty 3-series? - MPG and running costs 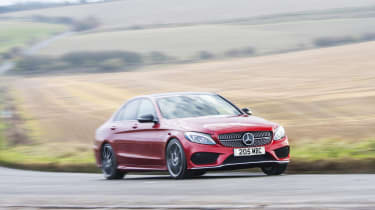 If Benefit In Kind and VED hold huge influence over your purchase (or company car acquisition) choices, the C350e will be the C-class for you, given it emits as little as 48g/km. The 94g/km C300h is also worth a look, being the only other C-class that dips under the 100g/km barrier, with a corresponding MPG figure of 78.5. Not that you'll get that in the real world of course, but it'll help you reap the tax benefits.

Unfortunately those benefits aren't quite as great as they were, with the latest VED rules meaning extra costs for cars that might previously have slipped through with zero VED (anything not solely powered by batteries, in other words), though Mercedes C-class buyers might avoid the surcharge for vehicles costing over £40,000 since both hybrid models are available below this threshold.

Smaller-capacity turbocharged engines mean most C-class models look fairly frugal on paper - the sole non-hybrid petrol model, the C200, still has a quoted 53.3mpg combined economy figure while the most parsimonious diesel, the C200d manual, reaches 72.4mpg in saloon form (with 101g/km of CO2). Even the C43 is apparently capable of 35.3mpg, while the C63 is only a shade behind at 34.4mpg - though good luck getting that once you've experienced the sound of that V8...

Mercedes offers a three-year/unlimited mileage warranty (with extensions available for an additional, variable fee) on its new cars and the UK’s Service Care scheme allows owners to spread the cost of servicing across multiple payments, with the outlay from as little as less than £1 per day. Insurance groups run from 25 to 39. 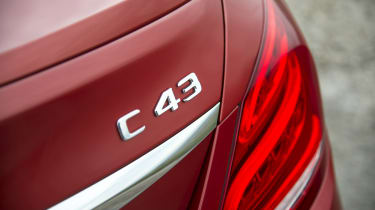 The Mercedes C-class line up now has a full plug-in, petrol-electric hybrid model. Called the C350e, it is one of a couple of hybrid options lurking within the C-class range.

Current recommendations for the eco-conscious include the C300h, which offers the best balance of economy and power. It’s a diesel-electric hybrid, the 27bhp supplementary motor housed in the 7G-Tronic transmission and working with the 2.1-litre combustion engine in 201bhp output. The C300h can’t be used in fully electric mode above about 20mph, but the torque-fill provided by electric power ekes the most out of the C’s diesel reserves.

It’s also eerily brilliant when the C300h seamlessly switches the combustion engine off and back on at A-road speeds when you momentarily come off the throttle and, although Mercedes’ 2143cc diesel can occasionally be a noisy operator, in the C300h it’s remarkably hushed. It’s probably the best-matched drivetrain for the C-class’ laid-back chassis set-up.