The S-class is particularly impressive when you consider just how much car you’re getting for your money. Yes, more thrills can be had in something with two seats and a flat-six, but it’s a whole heap of metal for the base £68,870 asking price.

Standard kit isn’t bad, but if you really want to turn the S-class into the luxo-barge it deserves to be, expect to add £15,000 worth of options over the sticker price.

Rivals in this segment were few and far between until recently, but the introduction of BMW's new 7-series means that now the S-class has a proper hi-tech competitor. It's a different car in many respects, with an increased emphasis on driving dynamics when compared to the Mercedes. 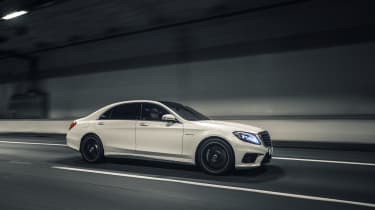 In terms of technology, things are more level-pegged now, with the BMW's rear entertainment package being significantly more impressive. The use of a 'Carbon Core', inspired by the i3 and i8 plug-in hybrids, is also a great move towards cutting the significant weight of cars in this sector - most clock in at two tons these days.

Audi’s A8, feels a significant step behind the S-class in terms of technology. It is magificently built though and there's a lot to be said for Audi's efforts to reduce weight through continued use of an aluminium structure. The A8 isn't light, but it does allow for a stiff structure without packing excess pounds.

Ultimately, you have to look towards Bentley, Rolls-Royce and Range Rover to find true competitors here in terms of refinement.

The S-class bests the two traditional saloons on tech but doesn’t even come close in terms of sense of occasion or luxury. There really is nothing quite like travelling in a Rolls-Royce Ghost or Bentley Flying Spur (and less still than a Phantom or Mulsanne, though those require another step up in budget). And the Range Rover? That offers something between the two, and of course that commanding driving position that none of the traditional saloons can match.