With the long wheelbase S-class models weighing around 2 tons, it’s a big and heavy car and it feels it.

The electromechanical steering does a fantastic job of helping you manoeuvre the beastly S-class about at low speed, feeling effortlessly light when driving about town. It also firms up nice and progressively the quicker you go, but it most definitely isn’t the last word in feedback. This is a car that’s all about isolating its passengers from the road around them, not engaging them with it.

You do get a choice of both sport and comfort settings for the suspension as well as the transmission. With such a heavy car, no matter how much the sportier suspension setting might stiffen the S-class up, it still doesn’t enjoy being hustled down a B-road. Whether it be the Saloon, Coupe or Cabriolet, when pushed hard the S-class, the feels cumbersome. The AMG models do feel more controlled, and the ample power and torque on offer means there is appreciable amounts of adjustment. Not excessive, wild oversteer (the traction control cannot be turned off) but enough movement at the rear to quell any signs of understeer with a squeeze of the throttle.

Left in Comfort is how the S-class is best appreciated. It isn’t as sharp as in Sport, but as isn't very accurate anyway, the losses are minimal. In Comfort, the ride is improved and much more akin to how an S-class should be, while the dampers still stop the biggest bumps and undulations from letting the body feel awkward or out of sync.

The Cabriolet is most effected by the different suspension settings, the most significant thing that the Sport mode introduces is how much of the shell’s rigidity has been lost by removing the roof. Left in Comfort however, and it isn’t as noticeable.

Use a relaxed driving style, rather than try to overdrive the S-class, and it makes much more sense. It will waft along at a fantastic pace as the ride and luxurious deep seats keep you from extremely comfortable, while the big AMG engines wuffle away in the background. 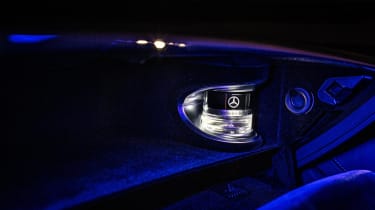 If you want to add some more complexity to your suspension you have two options. First there’s ‘Magic body control’, which can control the active suspension to deal with bumps and undulations in the road. Using a system of cameras, the S-class can essentially pre-empt the road conditions to deliver a better ride. And, secondly there’s 'dynamic curve' that sees the car tilting itself into corners to help increase agility and control.

The Magic body control is almost imperceptible, which possibly means it’s working very well but also means it’s hard to say that it’s a necessity. The dynamic curve function is also subtle, however what it does do does not feel particularly natural. However, it’s an undeniably impressive piece of tech, which as evo’s Jethro Bovindgon discovered recently in his time with the S65, does little when you’re out on track.

Ultimately, the entire S-class range, including the thunderous AMG models are about cruising in comfort. In this regard, they more than achieve what they set out to do.