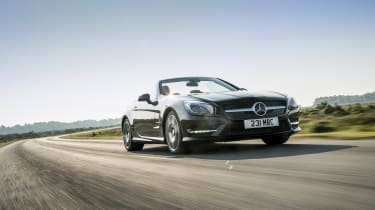 The SL-class range gets four different engine options and three transmissions, all of which are automatic. Things kick off with the SL 400, which makes use of a 2996cc V6 with twin turbochargers for a 362bhp power output (from 5500-6000rpm), and 369lb ft of torque between 2000 and 4200rpm.

Next up is the SL 500, which steps power up significantly thanks to a 4663cc, twin-turbocharged V8. There’s 449bhp on offer at 5250rpm and a handy 516lb ft of torque spread from 1800rpm to 3500rpm. Both of these engines come as standard with Mercedes’ latest nine-speed torque converter automatic gearbox, which is as smooth as you’d hope and presents a good mix of ratios for both strong performance and economical cruising. 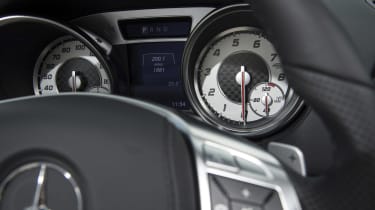 The other two models available use Mercedes’ seven-speed automatic transmissions as per the firm’s other AMG cars - an AMG Speedshift MCT 7-speed automatic, and an AMG Speedshift Plus 7G-Tronic automatic. The former, developed by AMG itself and offered on the AMG SL 63, uses a wet clutch pack to transfer drive, while the latter (on the AMG SL 65) is a traditional torque converter auto.