Where the interior design has held on to much of the original Mini’s character, the exterior design has been heavily affected by the current-generation R55 model’s move to a shared BMW platform. The place this is most obviously seen is in the extended front overhang, an element that defined the previous Mini’s bluff retro design.

To try to offset this dramatic change in proportion, Mini’s designers applied a large amount of curve at the front of the car, pulling the ends of the headlights and front intakes as far back as possible to try to hide the bulky front end. You can make your own mind up whether you think it’s successful or not, but to some eyes it almost looks like a knock-off of the original, rather than the next-generation model.

To further offset these new proportions, most of the design details that have come to define the modern Mini have been applied, but on a much larger scale. The rear lights have grown in size compared to previous models, something only accentuated by the ‘distinctive’ new rear lights fitted at the facelift. 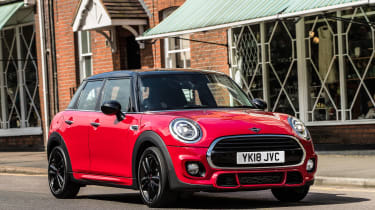 Made worse is the 5-door model, as Mini’s designers have not only given it a certain rake on the rear screen to try to distinguish it from the Clubman estate, but also fitted framed doors in contrast to the three-door’s frameless units. The result is that on top of an already weird profile, the door frame’s questionable execution leaves much to be desired in the design department.

Love it or loathe it, the new Mini definitely makes a statement, but with the new Audi A1 striking a better balance between aggression, nostalgia and the need to place these new motifs on shared architecture, the Mini treads a fine line between purpose and pastiche. We can't be the only people wondering how BMW plans to update the car for the next generation without skewing its features even more.