The interior has been just as much a part of the Mini’s retro design motif as its exterior, with each generation improving on quality and user-friendliness. The latest car brings with it a swathe of tech from BMW, including the same i-Drive system, only with re-formatted fonts and menus.

Build quality is impressive compared to many rivals, and although the interior doesn’t quite have the solidity of the Audi A1, its more joyful interior design is an important touch compared to the sometimes dour Audi. Centre to this is the large glowing roundel that sits in the centre of the dash. Now a home for the infotainment screen, the actual dials sit in front of the driver in a floating pod, with a central analogue speedo flanked by an offset rev counter. 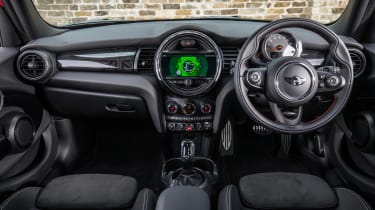 Although the ergonomics have been much improved, it’s still got plenty of flair, while personalisation options have now been taken yet further, with buyers able to commission their own interior panels and kick plates with bespoke lettering or branding.

Space has also been improved dramatically over previous models, although the three-door is still only really a four-seater. Rear-seat and boot space are better, while storage in front is greater, also. The bluff, upright windscreen still informs the short dashboard (and means forward visibility is pretty good, the A-pillars minimal hindrance of your view out), but overall, the Mini feels like a much larger car inside than its predecessors.